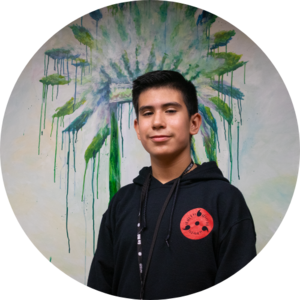 Christian Perez made Waxahachie ISD history in 2021 serving as the first student to ever compete in the National Spanish Spelling Bee where he placed sixth.

Perez is one step closer to making history again as he is headed to the Region 10 Spanish Spelling Bee.

Perez competed in the Spanish Spelling Bee for the first time as a fifth-grade student at Wedgeworth Elementary and did not consider himself a good speller. But he began learning from his mistakes and practiced the harder words more consistently.

Perez dedicated his time after school every day to study 1,500 words. He received third place at his first contest and advanced to regionals where he earned first place.

“It was pretty special,” Perez said about making history. “I went to get my trophy and every single teacher and everybody else was waiting for me. I was the first student to go to regionals and nationals, so a lot of my teachers were excited. My ones from pre-k and kindergarten said, ‘congratulations’ to me. I feel emotional, to be honest. I felt pretty happy for myself, and it was an honor to see everyone congratulate me.”

Through this experience, he learned more Spanish words and how to think quickly while taking his time. While in contest mode he knows to spell his words slowly and methodically. His mother helped him strategize to spell words with accents, memorize words that start with a capital letter, ask for definitions, use the word in a sentence, and for the word to be repeated.

“During the contest, I’ve never felt nervous,” Perez said about the next level of competition. “I’m actually pretty excited and go out there and show off my spelling skills. When I have a word, I just remember what my mamma taught me.”

He explained that when he is in the moment, his mother’s advice plays in his head.

Perez advises other students who have never competed academically is to “give it a chance; go ahead and do it; don’t feel nervous about yourself. It’s okay. You will always have a second chance like I did. I tried to win nationals. I didn’t and am trying again this year.”

Perez thanked the district’s Bilingual coordinators Ginger Aleman and Desirae Zarate who coached him after school. He also thanked his mother for helping him get to where he is today.