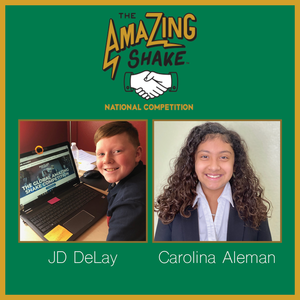 Two of Waxahachie ISD’s finest students were selected to participate in The Amazing Shake, a global competition that emphasizes manners, discipline, respect, and professional conduct.

The two students who represented Waxahachie ISD were Carolina Aleman from Wedgeworth Elementary and JD DeLay from Wilemon STEAM Academy. The two fifth-grade students were presented with this opportunity after Waxahachie ISD librarian Glenna Reisner and Wilemon STEAM Academy kindergarten teacher Sarah Beratto joined the Ron Clark Academy club for professional development. Since they registered the first week, they were awarded free admission to The Amazing Shake.

Reisner selected Aleman because of her leadership skills.

“She has participated in Destination Imagination, STEM Girls’ Club, UIL, and many other activities where she always shines,” Reisner explained. “When Carolina commits to a goal, she will work tirelessly to accomplish it. She is a strong student, part of our first dual-language class at Wedgeworth, and has a supportive family to cheer her on.”

Aleman said it was a lot of work, yet really fun. “The thing I enjoyed the most was writing a speech about Walt Disney and the history behind it, and answering the questions the interviewers asked me,” she said.

Aleman said the hardest question she answered was about responding to COVID-19. Her response noted the importance of safety precautions while still being able to live a fulfilling lifestyle.

Wilemon STEAM Academy fifth-grade teacher Everett Johnson said DeLay was ideal for the competition because he is one of a kind.

“When you are talking to JD, you feel like you’re talking to an adult in a fifth-grade body,” Johnson explained. “He has a great, outgoing personality, and is able to think and express himself in a respectful manner. He is a problem solver and exhibits confidence when he speaks. These are qualities that made him a perfect candidate for ‘The Global Amazing Shake.’”

JD thanked Reisner for recommending him and Johnson for mentoring and encouraging him. He also thanked his grandmother for her support.

The global competition typically occurs at the Ron Clark Academy in Georgia, but this year, students competed virtually. Students presented themselves in a five-day online competition through Zoom calls. The competition consisted of stations where competitors exhibited etiquette, composure, and savoir-faire.

Top performers advanced to the next level of challenges until there is ultimately one global champion. The schedule of events ran through May 18-22, 2020, and began with workshops covering interview techniques, first impressions, debate techniques, poise under pressure, and keys to successful preparation. On Monday night, competitors joined in small groups via Zoom to meet their online coach and participate in practice sessions.

Round one consisted of “The Gauntlet,” a session of professional interviews. Some of the questions were, “If you could eat dinner with anyone, who would it be?”, “What would your advice be to someone who had to fire an employee?”, and “What is the most important quality of a leader?”

Everyone competed in the first round, and students who did not qualify for subsequent rounds were able to view the remainder of the competition live and learn from their peers. DeLay was only two away from making it in the top 100 students.

“When I found out, I went into my room and squealed,” DeLay expressed. He looked forward to competing again in hopes of advancing even further. “I want to prove that I have what it takes to win.”

Round two was the “Lights, Camera, Action!” session, and round three was the “Group Interview” that took place on Wednesday. Another nightly ceremony took place on Facebook Live, and another round of top students was announced.

Students Zoomed in for round four, the “Breakfast of Champions,” followed by round five, “The Pressure Cauldron” on Thursday. The next round of top students was announced on Facebook live at 9 p.m.

The final round, “Don’t Let Them See You Sweat,” was held Friday, and the winners of The Amazing Shake were announced at 9 p.m. on Facebook Live.